Nostalgia plays a sizable component in the hobby of vintage computing and video games.  Interactions with games and computers by means of playing, hearing or even discussing them, can manifest emotions that range from flashback like reactions to physical muscle memory.  Even unwanted computer behavior at the time a system was released, are now (mostly) reflected upon with comical reverence.  These responses could be defined as nostalgia or simply put, the act of reflecting on fond, whimsical memories of the past.

The communities that have evolved around retro gaming and computers are broad and diverse.  Each “group” is akin to a tribe, and to this day, will defend their technological decisions made decades previous, with heated passion.  As many tribes as there are, the way community members engage with the hobby and community at large, is just as diverse.  Many produce music – the chip tune music genre is a thriving scene in 2018. Other’s produce art in the style of classic 8-bit games they had an affinity for in the 80’s and 90’s.  Another method of partaking in the community is the act of collecting, this can range from acquiring hardware, games cartridges, documentation and source code.  This subset of the retro digital scene is the primary focus of this essay.  What drives collecting?  Is it for a sense of nostalgia? Or does the act go deeper, is there value in preserving media and hardware? 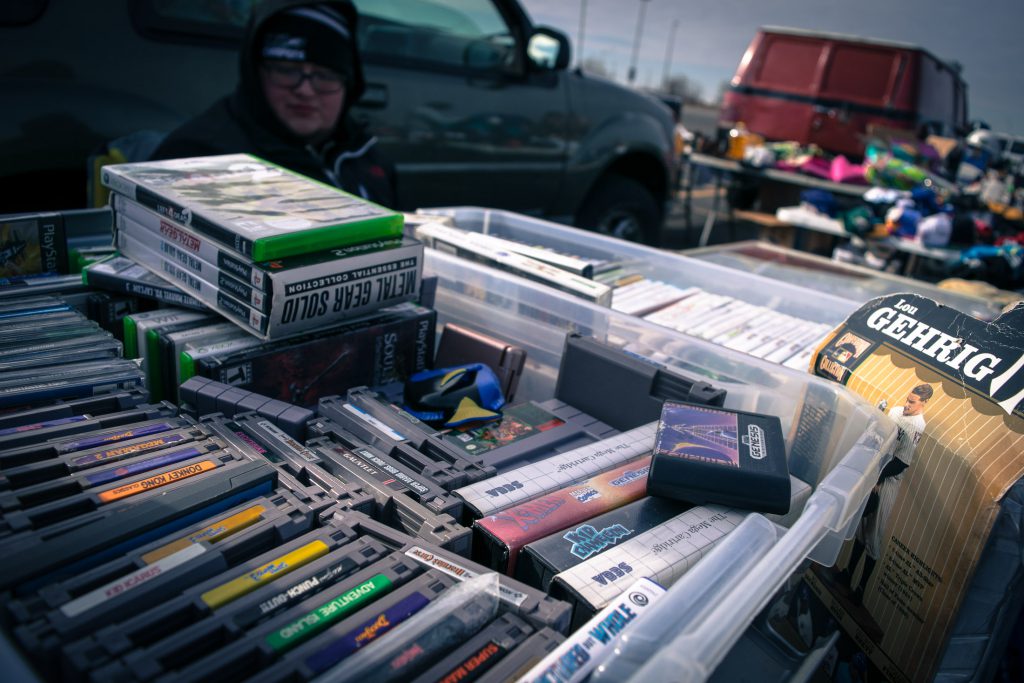 Boxes of game discs and cartridges for sale.

To answer the above questions, I would first like to set a scene that illuminates the drive of a collector.  The temperature out on this Saturday morning in January, is a frigid 20 degrees fahrenheit. Subtract another 10 degrees for a biting wind chill, and you’ll understand that this open, paved parking lot is not a place sane people are found.  Nonetheless, I’m standing at the far end of a long row of vendors, the scent of heated pretzels passes as soon as it arrives, driven by the wind.  Today, my outing to this somewhat sparsely populated flea market in northern New Jersey, will be a quick one. My purpose for being here is the hunt. The hunt for video games contained on small, plastic rectangles, and the search for beige boxes of silicon, yellowed in time by the Bromine fire retardant in their composition.

I survey the landscape; down one side, a number of vendors garbed in winter clothing that wouldn’t be out of place on the North Slope of Alaska, stand over used power tools. Further on, boxes that look to be from storage units, spill open, I make a mental note to revisit that vendor.  There, hunched over a table flowing with cables, weather damaged books and vintage toys, I spot a fellow hunter, another member of the “community”.  I head over like a savanna dwelling Hyena to see what my fellow pack member has found.  Only to find I’m moments too late!  In his hand are a selection of Nintendo cartridges, gripped firm, while he negotiates with the seller for a mutually fair price.  Upon examination of the eviscerated contents the box the NES (Nintendo Entertainment System) cartridges came from, I find my holy grail, Commodore 64 software cartridges that have been looked over. 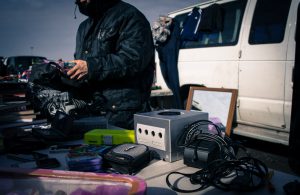 Certainly, nostalgia is a driving factor for the above documented obsessive behavior. What a strange past-time, the want to own, to covet these seemingly senseless pieces of plastic.  They are in a sense consumer waste, so why do global online communities exist to give voice and place to these groups?  Why do gaming events attract thousands of like minded hunters?  One explanation could be a variant of the nostalgia theme, the knowing that this piece of hardware was the source of enjoyment for it’s previous owners. 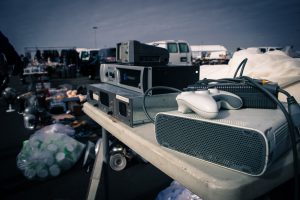 With the emergence of the smart phone and downloadable content, entertainment software has fallen into the status of a commodity (Erik Kain – Forbes, April 24th, 2015).  When one can buy a game for $0.99, play for ten minutes and move onto the next game, a cheapening of the format occurs.  This wasn’t always the case.  20 years ago the cartridges enthusiasts collect would have cost upwards of $40 and at that cost, what few games we had as children were cherished.  To have these objects of admiration in possession now, in essence captures those emotions.  It’s like having a genie in a lamp, with you owning the lamp.

Another side effect of the dilution of software development, is the credit given to developers.  During the early 8-bit years, around 1982, and most notably in the UK/European scene, programmers, musicians and artist were held in an almost rock star status (Anthony Caulfield, Nicola Caulfield – From Bedrooms to Billions, 2014).  This bygone history leads us into another aspect of retro computing culture, the act of recording and documenting artifacts we discover.

Magnetic media like floppy disks or tape have a finite life span, the bits begin to rot, zero’s and one’s are erased.  Likewise, documentation, packing and artwork that is in the form of paper, molds, crumples and decays.  Archiving media, scanning or making digital copies of the disk’s contents are a way to preserve the work by the industry founders that would otherwise be lost to time.  In essence, these acts could be described as digital anthropology – the binary existence and influence on human behavior. 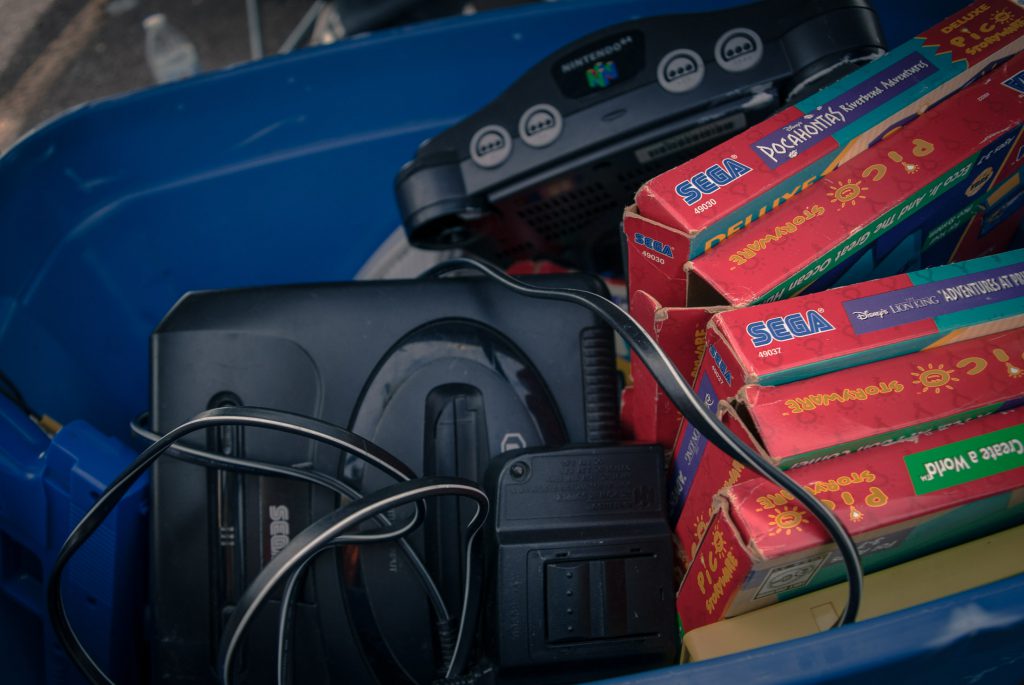 An assortment of early games consoles.

Consider the two following scenarios: what would the outcome be if the “source code” of William Shakespeare were permitted to decay into dust?  Or if the Doomsday book by the Norman invaders of 1066 was found rotting in the basement of an institution?  What would be the impact for our culture, if either of the two examples had not been scanned, recorded and throughly dissected for their meaning and data? Would we have the demographic and cultural understanding of Anglo Saxon England that we do now? Could writers from any background be able to learn and recreate the prose or emotion of Shakespeare in their own works?

While my questions above are hyperbolic, their intention has relevance to modern society.  Software, computers and most notably, the global consciousness, the internet, have been the greatest innovations and catalyst for change that we, as humans have ever produced.  Is it therefore, a wild aspiration to want to preserve the first glimmers of the digital revolution? 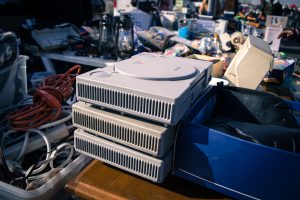 A healthy amount of curiosity for how things work is synonymous with collecting digital artifacts.  How would a mechanical engineer react when confronted with a steam engine?  It’s likely there would be a desire to know how the machine works, to examine it’s inner operation. Likewise is the behavior for individuals that lean towards the computing sciences.  Finding an obsolete piece of hardware and holding it, induces a strong sense of curiosity.  However, the mechanical engineer, unlike the computer engineer is not likely to go home with a steam train.  Kevin Mitnick is quoted as saying: “My primary goal of hacking was the intellectual curiosity, the seduction of adventure.” (K. Mitnick – https://venturebeat.com, October 21, 2011).  For a deeper explanation of the act of retro computer collecting, multiply the adventure of curiosity, with the adventure of the hunt and ultimately the find.

The hunt for and successful find of artifacts, has a visceral alter ego to it’s intellectual, archival counterpart. It’s a human connection to a digital concept, the senses being awoken by a synaptic firing that results in evoking an emotional response.  It’s hard not to liken my actions to the search for the “lost tomb of a pharaoh”.  As silly and fanciful as that may seem, these materials are a multifaceted source of inspiration, entertainment and knowledge for millions of people around world.  All of whom share stories in both the physical and cyber worlds of their collecting finds, technical knowledge and secrets buried deep in the source code.