Back in a time, long before the Oculus Rift, engineers and artists saw a world of deeper human – machine interaction. The Amiga was at the forefront of this vision, both in the video game arcades and in the home/office. This article will talk about the later scenario and the software that produced amazing new worlds, that I have a long history with.

Vista & VistaPro has made it’s way into the hands of Amiga owners through many releases and mediums. The first free public release was on the cover disk of Amiga Format, issue 33 of April 1992, this was my first tasting of the application. Later into the 90’s the full version of VistaPro 3.0 was included on the cover CD of CU Amiga in September 1997. Luckily enough I got my hands on a second hand version of the full package (including Terraform and Makepath) around 1993 – 94.

Despite the massive system requirements – 4 to 8 meg of fast RAM and at least an ‘020, I was able to run the application, in a limited sense, on a 2mb A500+. I recall spending evenings building and configuring scenes, starting the render of an animation sequence before school and coming home in the evening and finding it still running, and I was only producing 10 frames!

With the ultra slow rendering speeds, getting to know the user interface through trial and error was a laborious task. Without the full, documented version that I later purchased, using the complex interface was almost impossible. Features like complimentary tools that influenced the out come seemed confusing, and where logic would dictate that a higher number would produce a larger result, the opposite often proved true.

Even after I received VP 3.0, I remember calling Virtual Reality Labs inc, internationally, to try and get help. It must have been the most comical call the woman on the other end of the phone had received, an english sounding kid, perplexed as to how to use the software.

Nonetheless, an animation was produced and in combination with AutoDesk Animator on the PC at school, I was able to produce the first computer animation submitted as course work in the East Midlands of the UK.

Through my contemporary experiments and retro VR journey’s, I’ve complied a list of “ahh-haa’s”, that I’ll send back to my self… as soon as I have the Quantum Flux Capacitor working again. 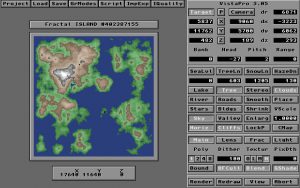 Camera and landscape detail settings are contained with the top two panels of the right hand control panels, here are some helpful call outs:

The third and last panel consists of 4 tab screens, these windows will control Rendering, Lens, Fractal Generation and Light. 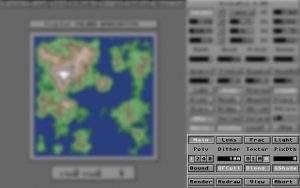 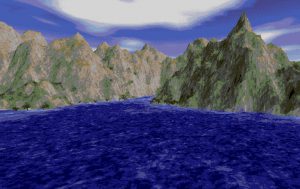 For a more detailed guide to get you up and running in VistaPro, head on over to my other article on the Amigos Podcast website.